As the elements represent, the wands are typically fiery in nature. Here we see a young man/person who is a go getter. He is a born leader. His will is absolute and he will have his way one way or the other.

He is focused and will stop at nothing to have his way. This can either represent the querent or the position he is in. Something is happening at lightening speed in the querent’s life and he has to match up to the intensity of the knight of wands. 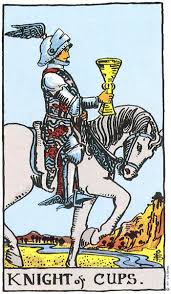 Just like the cups signifies emotion, this young man here too is influenced by his emotions. He has his heart rather his head set on something he wants. He may also be a bearer of some message as all knights are, but that which relates to the heart.

He is set in his ways when it…

Like so many people, I am a paradox. I am a politically conservative vegetarian. I am from a Christian background, and still tend to like those values, but am a metaphysical astrologer trained in science who has an interest in the magic of ancient Egypt and a weird belief that some piece of our essence can live on a server. I live in Texas, but like chatting with my international Wordpress pals the best. I learn by teaching. Technically, I am a "Leo," but I am very, very Aquarian with a dose of Scorpio. I bitterly complain about Algol (and Algol personaliites), yet it is the one star that defines me most (other than Regulus). (Which, oddly, makes me an Algol personality.) I am a reclusive lover of peace and quiet who has the Ascendant in the Via Combusta (the most conflict ridden part of the zodiac). I am an incredibly private person with a blog with over 800 followers and 50 to 150 regular daily visitors. I could go on, but I think you get the picture. View all posts by Grandtrines

This is a text widget, which allows you to add text or HTML to your sidebar. You can use them to display text, links, images, HTML, or a combination of these. Edit them in the Widget section of the Customizer.